skip to main | skip to sidebar

Hello, My name is Epi, and I have a confession to make.

While I love my kids and I believe strongly in being an active participant in their education....

I hate school concerts. Hate them.

The school where FC goes is a brand new charter school. FC was in their first kindergarten class. He's now in the third grade, and the growing pains the school has experienced in the beginning really haven't been resolved, particularly when it comes to the school concerts. They never have enough seating, resulting in at least 100 people lining the walls in the gym. The PA system is always set to a level just below that of a jet engine preparing to take off (and this is coming from a girl who used to sit up against the speakers at the hard rock concerts that would come to town). You can't hear the kids actually singing.

Tonight was no different. Up until the last song.

The music teacher stood up with the microphone and announced, "Please stand while our Third Graders sing the National Anthem."

Without any backup music, and without the words in front of them, more than 90 eight and nine year olds stood in front of us facing their flag, and proudly sang the Star Spangled Banner.

At first it was just their young voices, by the third line, the entire audience was singing along with them. Many with their hands over their hearts, myself included.

And I might have shed a tear or two. 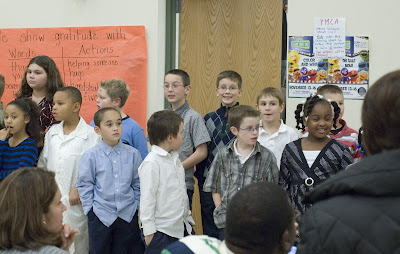 That's FC in the back row, in front of the doorway with the diamond print sweater on. My pseudo adopted son, J, is to his left.

I was so proud.

"Well, Baby, it depends on what you believe a Veteran is. I was in the Army, but I never served in a war."

"But you were in the Army... That was hard wasn't it?" I could see the wheels turning in his head.

"Well, parts of it were hard. But what I did in the Army wasn't like what your Grandpa or my Grandpa, or my cousin C, or Matty had to do. They chose to leave their friends and family to go to a whole other country to fight so that we could have the rights we have. Has your teacher talked about that at all?" I didn't know what else to say to him in that crowded hallway.

How do you explain what sacrifice really means to an eight-year-old?

"But Mom, Mrs. K told us that anyone who has ever been in the Army is a Veteran. And Veterans are heroes." His eyes were so bright... I hadn't spent alot of time talking about my time in the Army with him. He had seen pictures, heard a few stories and for a period of time he loved to wear a hat I kept, but that's about it. It just hadn't come up very often in the past.

I swallowed hard. What do I say to him?

"Really??? So you're a hero too??? Come look at this!!!! It's for you!" He was dragging me down the main hallway towards what they call the "middle hall". When I saw what he was presenting me with, it took my breath away. Where a stark white wall used to be was this: 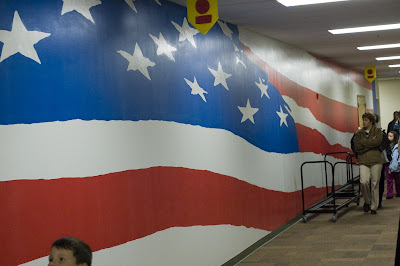 Once again, I didn't know what to say. All I could squeek out was, "Thank you, FC."

My cup runneth over, Baby.

Absolutely awesome. What a great kid!

Cool, very cool. that is a good boy child.

You are a hero.

And now that you are out of the military, you are still serving on the front lines in one of the most honorable professions.

Stop belittling your contribution and accept the praise. You deserve it.

Wiping away the tears!
What a great kid..

Dang that is one hell of a boy you have got there Epi.

And yes, thank you to you too.

Your (wonderful) kid is proud of you for good reason. Why are you reluctant to adopt the title?
Anyone in the military during wartime is, by definition, a Veteran. If that applies, you IS one!
My sister was a Navy electronics technician during the last years of Viet Nam. She could easily have found herself with orders to Southeast Asia. She knew she was at risk when she raised her hand and swore "to protect and defend".
She is proud to be a Veteran.
Doesn't that apply to you too?
Stand tall, Epi.
And tell FC thank you from this Veteran.

Thank you for your service, Epi.

this one got me teary eyed.

Out of the mouths of babes, comes the truth.

Oh huuuush, ya'll are too much. Thank you, so much.

The time I spent in the Army taught me some very valuable lessons, I got so much out of it... I'm very proud of my time spent there.

I feel like I got more out of the Army than the Army got out of me, if that makes sense. And that's why I'm reluctant to "accept the praise", as Braden says. :)

How wonderful. What a great boy!

Hells bells! Just reading about these kids singing the National Anthem -with no accompaniment -made me tear up and cry too! And congrats on being a "hero" as well -which yes, as a veteran, you are one, ya know!
Just wanted to thank you for visiting and commenting on my blog today and hope you come back and visit some more. Peace!

Dang, ya made my cry at work.

Who is this poor girl?

Let me make this perfectly clear...
Names, ages, genders, locations, hospitals... All fake. Totally and completely fake. Any similarity to any event that's ever taken place in the history of man is purely coincidence. My thoughts, beliefs, etc. are my own and may or may not be the thoughts, beliefs, etc., of my employer, my school, or anyone I know.

In fact, they're probably not.